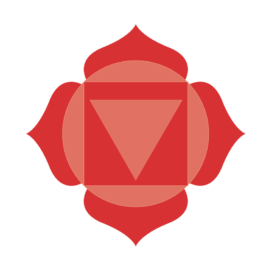 The first energy center, Muladhara, is first of the main seven chakras. It is the seat of the kundalini. The Muladhara Chakra opens downwards connecting us with the Earth. The energy flows in and out through this chakra, and the presistance of this flow can improve your health. Muladhara controls the lower part of the body, below the belly. If it is closed, it causes illness of the colon.

The First Chakra is associated with the very important principle of struggling against the following impulses of the lower human nature:

The need for food and drink, indolence of the mind and body, need for sleep (dullness, sloth, inertia). 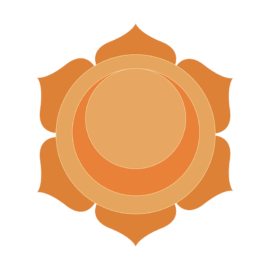 This Swadisthana or Svadisthana Chakra is the second of the main seven chakras. Women have more problems with this part of the body. The sexual energy is creative energy; when blocked, and then the first chakra is also blocked. It means that the kundalini energy is blocked, too. It is important to keep it open and to enable the flow through it. It controls masculinity and femininity, making us what we are. When the sexual energy is blocked, love itself is disrupted. Love cannot be made separate from the exiting creative energy that originates in this Chakra.

The second energy center, the Svadisthana Chakra is connected to the principle of fighting against: 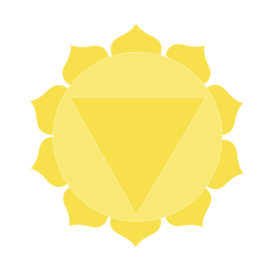 The third energy centre, manipura, is located in the area of the solar plexus. It begins from behind and opens up in front. The love energy is changeable. The plexus energy is the sturdiest energy. When the manipura is open, it maintains a relationship among people. It makes us feel to whom we belong. It maintains friendship. When we are connected with people, we radiate love, we are beautiful. When it is closed, we feel separated from other people – fear separates us and this chakra is blocked. Men have more problems with the manipura.

The energy center Manipura is third of the main seven chakras. It is connected to the principle of resisting: 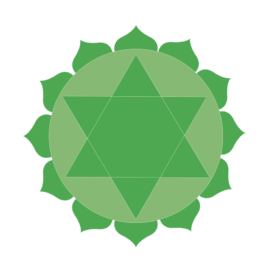 Anahata Anahata is fourth of the main seven chakras. When the heart is open, love flows. Every positive emotion has its opposite – negative emotion. Love -hate, joy – sorrow. When energy flows through the heart, we can express various emotions. All energies are good. If we block pain, we block joy also. To preserve a course of positive things, we should leave a possibility for negative emotions. Love is not healthy until it has passed through the Vishudha Chakra. If energy comes only up to the heart and would not go further, then this energy can be manifested in, for instance, falling in love. Falling in love brings imbalance – one second we are happy, the next we are unhappy, possessive. That is why it is necessary for the energy to flow upwards in order to be transformed into joy.

The fourth energy center, the Anahata Chakra is connected to the principle of fighting against: 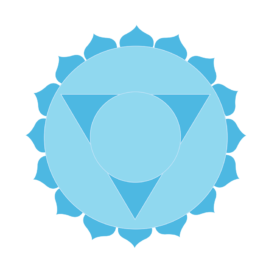 The energy centre – Vishuddha is fifth of the main seven chakras. It controls speech, the body, and anxiety. This chakra transforms energy into joy. The sixth and the seventh chakras are not connected with the spine, as the other five.

The fifth energy center, the Vishudha Chakra is connected to the principle of fighting against: 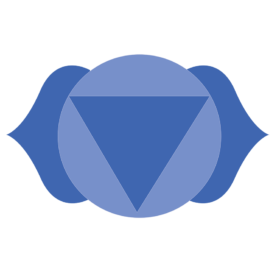 The energy centre – Ajna is sixth of the main seven chakras. It controls all higher functions: remembrance, memory, intuition, awareness and unawareness. Fifty percent is not used, because we do not use intuitive thinking. Conscious and unconscious activities should be balanced. Ajna is connected to the heart centre.

The characteristics of the sixth energy center – the Vishuda Chakra are:

It is linked to the Anahata. “From the Heaven to the Earth Blue Flame is burning from the pineal centre. 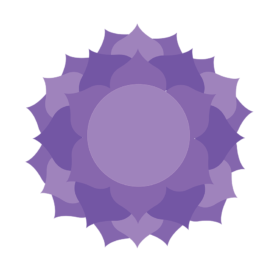 The energy centre – Sahasrara is last of the main seven chakras. It is the only chakra directed upwards. It is connected to the universe, channeling most refined frequencies. This centre unites the static and kinetic aspects of consciousness. Man becomes an excellent medium for Divine Planetary and Transcendental Radiations.

“Solfeggio” is the vocalization of the tones in a music scale (also called “solfa” syllables). The original Solfeggio scale was composed of six tones. The names of these original six sounds (Ut, Re Mi, Fa, Sol, La) came as abbreviations of the first stanza (in Latin) of the famous Medieval Hymn “Ut queant laxis”, written by Paul the Deacon in the 8th Century A.D. for the feast of the birth of St. John the Baptist. 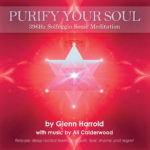 Solfeggio guided meditations music for healing contain an array of sacred instruments and sounds such as crystal bowls and didgeridoo and sacred chants, which work to further enhance the effects of the solfeggio tones. These incredible tones each resonate to specific frequency that our original blueprint is composed from. Exposing ourselves to these frequencies helps to bring our bodies, cells and DNA back into balance. Different parts of our bodies and organs all have specific frequencies of optimum resonance (perfect state of health), and therefore listening to these tones allows the body to absorb and remember (know) its original blueprint, moving it back towards its perfect state of alignment and resonance. Modern science is now beginning to recognize what the ancient mystics throughout time have been saying; that everything is in a constant state of vibration, and therefore everything that is vibrating has a sound (even if it’s not audible). Everything also has its own optimum rate of vibration, and this is called resonance. When we are in resonance, we are in balance and harmony with creation. Emotions and mental states also have their own optimum resonance and with the recognition that every organ, and every cell, absorbs and emits sound, we can therefore understand how specific sounds and frequencies can be used as powerful healing tools. This is how the ancient Solfeggio frequencies work and is why the Gregorian monks used this specific scale for chanting and healing.

The Solfeggio frequencies are sound frequencies used for healing purposes. The story about these healing sounds is quite fascinating. It turns out that they were accurately sung in the context of ancient Gregorian chants, but the precise tuning, the technique and the knowledge about their healing properties were somehow lost later. It was Dr. Joseph Puleo who rediscovered the Solfeggio sounds in the 70s by finding the frequencies (measured in hertz) of these unique healing sounds. The interesting thing is that he found these frequencies encoded in the Bible, in the book of Numbers, chapter 7, verses 12-89. He used the Pythagorean method of numeral reduction to unravel the mysterious six mathematical patterns encoded there: 396, 417, 528, 639, 741 and 852.

One notorious scientific validation that these patterns can be used as vibrational healing frequencies is the fact that the 528 Hz frequency is precisely the one used by geneticists nowadays to repair damaged human DNA.